American brand Mars Inc. released a controversial advertisement for its Snickers chocolate bar after it was slammed for promoting homophobia. The ad featuring influencer Ales Gibaja sparked outrage after allegedly juxtaposing men with transgender people. In the process, the chocolate maker not only removed the 20-second ad but also apologized for any “misunderstanding that may have been caused”.

The commercial begins by showing influencer Aless Gibaja ordering a “sexy orange juice with vitamins A, B and C: hugs, kisses and hugs” as a friend exchanges puzzled glances with the waiter. After a few seconds, the waiter hands over a Snickers ice cream bar to the popular transgender figure. Immediately, Gibaja appears to transform into a bearded man with a deep voice. “Better?” asks the friend. “Better,” the man replies as the tagline reads: “You are not yourself when you are hungry.”

The announcement was shared online earlier this week, where it sparked widespread criticism, with some also demanding an immediate boycott of the brand. In a statement, the State Lesbian, Gay, Trans and Bisexual Federation is ashamed and unhappy that there are companies that continue to perpetuate stereotypes and promote homophobia ”. They were joined by the country’s Equality Minister Irene Montero, who called on creators to be “tolerant”. 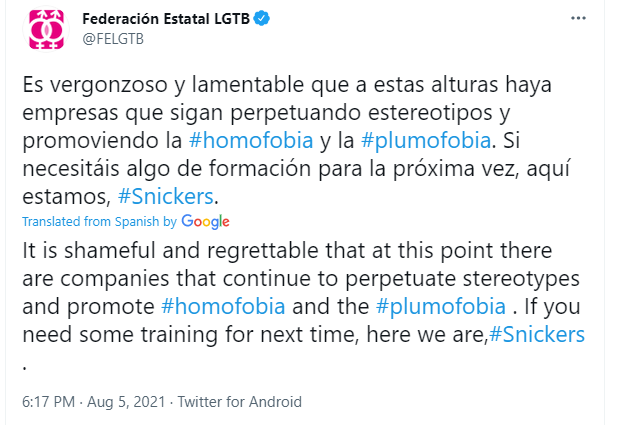 It comes as another European country, Poland, has seen massive protests opposing a homophobic law. At one of the largest pride parades in Central and Eastern Europe, dubbed ‘The Equality Parade’, participants showed their support for the rights of lesbian, gay, bisexual and transgender people in the wake of the enactment of regressive laws in Poland and Hungary, condemned by all of Europe. According to reports, the pride march was led by the mayor of Warsaw, Rafal Trzaskowski, with several liberal politicians showing their support for the LGBTQ + community.

Likewise, the Hungarian capital Budapest has seen hundreds of thousands of protesters condemn the policies of the right-wing Hungarian government as they flooded the streets with banners of pride chanting pro-LGBTQ + slogans. Citizens have expressed their anguish at the laws of the government of populist Prime Minister Viktor Orban which “stigmatize” sexual minorities across central Europe.